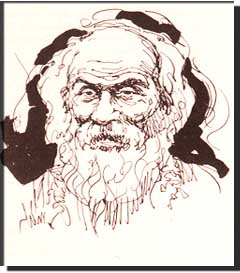 Rajarshi Purushottam Das Tandon was at the time a Member of Parliament.

Once, when he went to collect his salary cheque in the Parliament Office, he asked the clerk there to transfer the amount directly to a “Public Service Fund”. The officials over there were pleasantly surprised by his generosity. One of his colleagues standing nearby said: “There are hardly four hundred rupees as your allowance for the whole month. And you are donating the entire amount for social service?” Tandon ji humbly replied – “You see, I have seven sons and all are earning sufficiently to raise their families; each one sends me one hundred rupees per month. I spend only about rupees three to four hundred from that and the rest goes to some philanthropic causes. This allowance as a Member-of-Parliament is again extra for some one like me. Why should I save it for myself or my family? Such was the character of our leaders.

It was because of this natural austerity and detachment from selfish possessions that he was called a “Rajarshi”.

A friend of mine told me another story.

He happens to be the grandson of Rajarshi Purushottam Das Tandon.

When his (Rajarshi Purushottam Das Tandon) son was getting married, the barat was to go to the bride’s pace. All the baratis were traveling in the bus. On the way the bus passed through a chungi (checkpost meant to collect taxes in those days). The officials at the post signalled the bus to stop. They went over to the drivers cabin. On enquiry, the driver informed them that the bus was ferrying the barat of the famous Rajarshi Purushottam Das Tandon’s son to the bride’s place.

On hearing this, the officials lifted the barrier & allowed the bus to go without collecting the taxes.

When Rajarshi Purushottam Das Tandon came to know about this incident. he was infuriated. He wrote a letter to the them prime minister Lal Bahadur Shastri. In the letter he narrated the incident & also wrote that he is sending with the letter the taxes due to the government (few annas). He also urged for taking effective action to avoid repeat of such lapses.

This incident is a picture of our erstwhile leaders and epitomises the national character that was led by people of such high morals.

Contrast this with today’s leaders’ (sic) reactions to scams & frauds they participate in abandon. What have we come to.

Whenever I recall this story, my heart fills with pride. I also feel that we, as a nation, can regain the moral height that we were so proud of and rebuild our national character that justly defines us.

Purushottam Das Tandon (August 1, 1882 – July 1, 1962), was a freedom fighter. He was customarily given the title Rajarshi. He was awarded the Bharat Ratna, India’s highest civilian award, in 1961.

2 Replies to “Character – An inspiring anecdote”